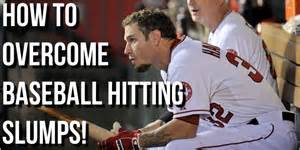 The first thing for all baseball players to understand is that everyone gets in slumps. It’s a normal part of baseball if you play it for any significant amount of time. It even happens to the Hall of Famers and it can happen to you.

One of the most durable, consistent players of all time, Cal Ripken wrote in his book about a particularly bad slump in 1990 when he was batting .209:

“I was as frustrated as I’ve eve been. I was at rock bottom, thinking I might be through. I mean, it wasn’t’ a matter of being tired. I just wasn’t myself at the plate. I had developed bad habits, trying to do too much, and the more I fought it physically, the more it became a mental problem.”

The bottom line is that you have to keep the proper perspective when in a slump. If you’ve performed well before, then your body knows how to do it again.

Baseball slumps are particularly insidious because you can be performing very well with your body and still not be getting on base. The way slumps usually begin is when you hit the ball right on the nose but at fielders for an extended number of at-bats. After awhile, you start doubting yourself and the little voices of insecurity start to come up.

This leads to PRESSING, the number one mental mistake ballplayers make. You get behind and then start thinking that you “Need” this next one. Pressing is the biggest reason that slumps keep going. What you want to do instead is to treat every at-bat the same as the last. Be robotic in your pre-hit routine. Every swing and every chance at the plate is an independent event.

“Worrying, that’s mistake #1. Now that I”m thinking about my slump, I’m also starting to think about how to overcome it. This is when my trouble begins. In my effort to overcome it, I’m changing my stance, my swing, and my stride, and this further handicaps my timing. So my best bet for ending a slump is not to worry and go right on batting in my regular style.”

You might be thinking: “That’s great, but how do I stop from worrying?”

The solution is to go back and work on your fundamentals and increase the trust you have with your unconscious mind that it knows how to perform…and then let it. Keep your “worrying” mind busy with the process and then let go. Hypnosis programs this in very easily.

Hitters might be surprised to learn that there is even such a thing as a pitching slump…there is. Just like batting, a pitcher, at times, can feel on top of the world and throwing his best stuff…and still get shelled. That’s baseball.

Many times a pitcher will get a win when the opposing team hits everything, yet he is forgiven as the big “W” is posted after his name because his team just happened to score more. In either case, of course, ERA accounts for that in the long run.

However it happens, again, you want to be the same person out there on the mound either way…win or lose…dominating or getting hit hard. That is how slumps are minimized or ended.

Don’t get me wrong. If you are in a slump, you should go have your coach or trainer observe your form and fundamentals by all means. Whatever you do, never work on changing any mechanics during game time. That’s for practice.

“Slumps are very difficult things to try to decipher or decide which way to go to get out of them…The thing is to discipline yourself mentally, to build on what’s positive and dismiss what’s negative…”

As I mentioned before, if you play baseball, you will eventually get in a slump. You can, however, create a mental toughness where it goes no longer than the natural course of events without you making it worse. You must have cleared your mental baggage and belief system about slumps from your unconscious mind. This will allow you to stay focused on the task at hand and play ball in the moment. Worry and doubt just don’t appear and the slump ends as fast as it started.